It’s been a minute. I have tried and tried to write this thing but nothing was coming. In the meantime, I wrote three books (Being You, which you can purchase here, and two fiction, which will be released later this year or early next year) and created a Home Study Organizer and adoption printables business called Handheld Adoptions on Etsy. So, I’ve been writing, but like I’ve said on this blog before, I’m not going to do a post just because. That may be marketing suicide, but whatever. At least it’s being true to myself.

Anyway, I feel like I’ve been on a huge writing/adoption/birthmom journey. I have been working in international adoption in China, and I have purposefully sought out adoptee voices to listen to and learn from. And I have. I truly have learned so much about this triad thing. Deep, deep lessons. Things, as a birthmom, I didn’t want to know. That’s what happens when you dig in and do the actual work. As a social worker, I’ve seen hundreds of cases at this point both domestic and international, and the truths involved are staggering. The depravity is tangible. The traumas are rampant. The least of these have names. My need to make this birthmother thing palatable led me to the discovery that I have work to do.

In my most recent journal, Being You, I said that I think the problem with post-placement care for birthmoms is that it’s too grief-focused. The fact that there isn’t enough post-placement care is another issue entirely, but whose fault is that? What if these lovely men and women just haven’t known quite what to do for us? What if they just saw the grief and started there? I know I did.

But, I’ve been thinking about how grief-focused it all is, and when I wrote the journal I really wanted to focus on the aspect of living out the actual choice I made. When I understand the grief and my triggers and how to deal with those, what then? How do I simply be a part of an adoption relationship? That was good, cathartic even, and it planted a seed inside me.

Lately, I’ve also been devouring everything Brené Brown, as I often do, and learning and re-learning about being my imperfect self and courage, connection, and compassion. I’ve thought about being in the ring getting my butt kicked and showing up and being brave and getting back up over and over. This all sounds sexy but it’s so not.

Then, in my work, I take in as much Karyn Purvis stuff as I can. I recently attended the Empowered to Connect conference where, once again, I sat thinking of birthmoms in open adoptions. I thought about the foster mamas and the biological parents attached to the children they care for. Trust-based Relational Intervention (TBRI®) is for them too.

All of this has me thinking, there has to be something more. What if along with the grief counseling and grief-survival skills we teach birthparents, we teach them what courage looks like, how to connect, how trauma affects the brain (which they have experienced as a result of the separation), how trust works? What if we teach them to be trauma-informed people, who have compassion for the needs of themselves and their child?

Could we change the overall health of adoption relationships if we approached post-placement, or dare I say placement, care in this way? Could we better inform women considering adoption of what the “other side” is like if we talked openly about the work they will have to do when they get there? Could this help them make a more informed decision? Would they feel more like a part of the relationship and less like a means to an end for a hopeful couple? Would adoptees feel more connected to their first moms and dads?

My mind is spinning! Is yours? I would love some feedback on this idea. 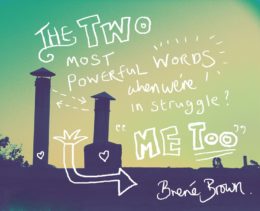