Full Circle, Reconnecting with My Son

You never give up hope and you never deceive yourself about your current reality. That’s the Stockdale Paradox. That’s the life I had lived for twenty years. After placing my first child, my son, for adoption in 2000, I never gave up hope that he would want to find me, and I never deceived myself about the reality of my situation. We were separated. I chose this.

The first years after placement I spent in grief just trying to make it through what they told me would happen—I would move on, he would move on, all would be well. Then, what they said would happen, didn’t happen, and the next years were spent grieving that reality, my reality. Eventually, I embraced the Stockdale Paradox. I would live as if I were going to meet him, and I would stay conscious of living without him, doing my best to live and love him well from ‘here.’

I fought hard to keep him present. To consider him in my daily life. When we were dating, I told my husband about him, and eventually, to our children from the time they were babes lying in their cribs. I kept his picture up in our home. We celebrated his birthdays, each of us offering up a wish or hope for him on his special day. And there was not a day that his name was not offered up in prayer, sometimes with weeping, sometimes with hope.

The idea was that even if he never showed up, loved me, etc., I was going to show up, love him, and keep him a part of my life as best I could because I loved him no matter what he would choose to do in the future. My son’s behavior would never determine mine.

At eighteen, this magic time that a lot of birth mothers idealize as the climax of their adoption story when they will be reunited with their children, nothing happened. He graduated high school, played a lot of soccer, and went off to college without me. We remained separated. I chose this.

I asked his parents never to push him or force him into a relationship with me. It gave me a ton of love and respect for them that they considered him first, they let him have a voice in our relationship, they let him make his own choices. It spoke volumes to me about how much they loved him. It kept us on common ground—the sacred ground of agape love for this boy, our boy.

Last July, when he was nineteen years old, he emailed me. I was just finishing a walk on the treadmill in my apartment in China. I sat down and bawled my eyes out. Was this really happening? Within 24 hours, we had a Skype call. It was an hour and a half long, and I got to say some hard things like I’m sorry and I did the best I could at the time. He said some hard things too, but they were needed and good. It was an honor to be given his vulnerable words and feelings and hold them close. I still do.

We messaged for months as I continued to live in China. It was amazing and scary. I talked a lot about adoption and wrote about adoption and encouraged birthmoms through writing, but now, I had to put my money where my mouth was in my own relationship. I had to pursue when I felt insecure, and let things be when I wanted more. I found myself feeling like a schoolgirl, relishing any contact I had with him, lighting up when he messaged me, thinking of him all the time. And the longing for him….oh, the physical ache…I thought it was bad after I placed him, but no. The visceral need to hold him came roaring back with a vengeance. I would burst into tears sometimes from the desperate need I had to touch him again.

Then, COVID-19 hit China. Our company evacuated us to the States. When things started escalating in the States, his parents brought him home. We were suddenly, unexpectedly in the SAME STATE. After enduring the lockdown mandated by our state, he messaged me. He wanted to come the next day. I could barely breathe I was so excited.

I didn’t imagine what the reunion would be like. My hope would not allow me to envision it. But when it happened, it was quiet. I had no idea what to say. “Oh, my gosh. Oh, my gosh! OH, MY GOSH!” That’s what came out as I squeezed him—hard—for the first time in twenty years. I barely felt his big body enveloping me, his heart pounding next to mine, his nervous laughter in my ear. I felt pure bliss at holding him again. How long had I longed for this? But there was something else—a deeply seeded fear.

Would I be enough? Would he love me? And was I worthy of his love, if he even considered it?

My younger son, Deacon, came running up to him and embraced him. I almost choked on my heart sitting firmly in my throat and swelling up with joy. My daughter Cadence was next, complete with a plate of cookies she made for him, and then, my husband Matthew. Because of COVID-19, we are still living with friends, and Ginger, who was the first person I voluntarily told about being pregnant with him, hugged him as well.

“I’ve loved you for a long time,” she said, and I nearly fell over. After feeling so alone in this journey sometimes, here was evidence that I never had been alone. Still, I couldn’t look at her. It was all too much. The full circle closing around us.

After the brief introductions, our first move was to be alone. “Are you nervous?” I asked him.

We spent the next 48 hours together, sometimes alone but mostly with Matthew, Cadence, and Deacon. Ginger and David made us dinner one night and Dan, our chosen-family, came up from Charlotte to be with us. I sat by my son, who was in my presence—OMG!!!—every chance I could. He was an absolute dream. He was gentle and funny. He embraced his siblings physically and engaged them in conversation and games. It felt right, full. And it was full. It was a full, full circle. It wasn’t that this child I placed for adoption was suddenly back or that I had a piece of myself back; it was more that he was always here. There wasn’t a huge adjustment for my kids or a hurt lingering within my husband. This person was our person, and we were his. It was beautiful and good.

“Take care of him,” I told God twenty years ago.

I tried not to make my son feel too weird by staring at him or touching him too much. Also, the urge to cry was constant, and so I had to steal myself away to keep the drama level tolerable. It was intense, and yet, there was a lot of laughter, stolen glances, and pride at the man he has become.

Nothing could have prepared me though for him leaving. In all of my excitement to be with him, I had not considered that I had to let him go. I had to stand there while we were separated again. And the fear, oh the fear, and the lies, the ridiculous ones that creep up looking so legit, came flooding back.

That’s all you’re going to get. That thing you said was stupid. He only needed to see you one time. Your emotions were too much for him. He thinks you’re crazy and is glad all this is over.

Matthew poured me a healthy glass of scotch, which worked significantly better than the ice cream I had after our first separation twenty years ago, and I went upstairs alone and tried hard not to hyperventilate. I breathed deep for a long time, tears pouring out of my eyes.

Then, I finished my glass of scotch, stood up, and stretched my hands up to the sky. “Thank you,” I told God.

I’m not a girl who thinks adoption is all unicorns and rainbows. Obviously, I have lived through a lot of heartbreak because of it. But I do recognize God in my story. I recognize the process, that can be more like a cycle for me, from suffering to hope found in Romans 5. “Suffering produces perseverance, perseverance produces character, character produces hope. And hope does not disappoint us.” Hope does not disappoint me, and neither does living each day choosing to love my child despite being separated from him.

Reconnecting with my son (in his time, when he was ready, by his choice) has taught me something very valuable about God. God didn’t just choose me once, but He keeps choosing me, keeps coming after me, and keeps loving me every single day. Not because of my behavior, but because of His overwhelming love for me.

I never needed anyone to justify me as a mother to him; I was doing that with my everyday actions to include him and celebrate his life. But when my son wished me a Happy Mother’s Day the day after he left, it was a full circle—a very full circle. Love never fails, the Scriptures say. Truly, it doesn’t, and I’m so thankful. 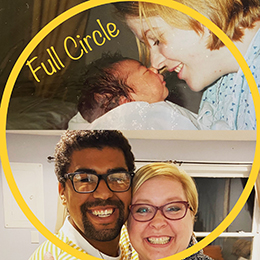